One of the most emblematic and unique forests in Spain is Garajonay, in La Gomera. The continuous presence of mist which is caused by the Atlantic trade winds supplies the highest places of the island, with all their coolness and humidity. This was a crucial fact for the development of a type of forest that already existed in the Mediterranean coast millions of years ago, laurisilva or laurel forest.

The name of Garajonay comes from a prehispanic legend where two lovers, Gara and Jonay, aboriginal princess and prince, and whose parents disapproved their romance decided to take their lifes sticking a spear in their chests on the highest peak of the island.

Nowadays, Garajonay is the best preserved sample of the Tertiary period, which comprises mature laurel forests of Canarian laurisilva, unique habitats of Monteverde(evergreen plants), bushes or spectacular geological monuments and an extraordinary and unique fauna as well.

A big plateau can be found in the central area of the island covered with an homogeneous, thick vegetation and an amazing biodiversity caused by the soil variations and microclimate changes of the park. 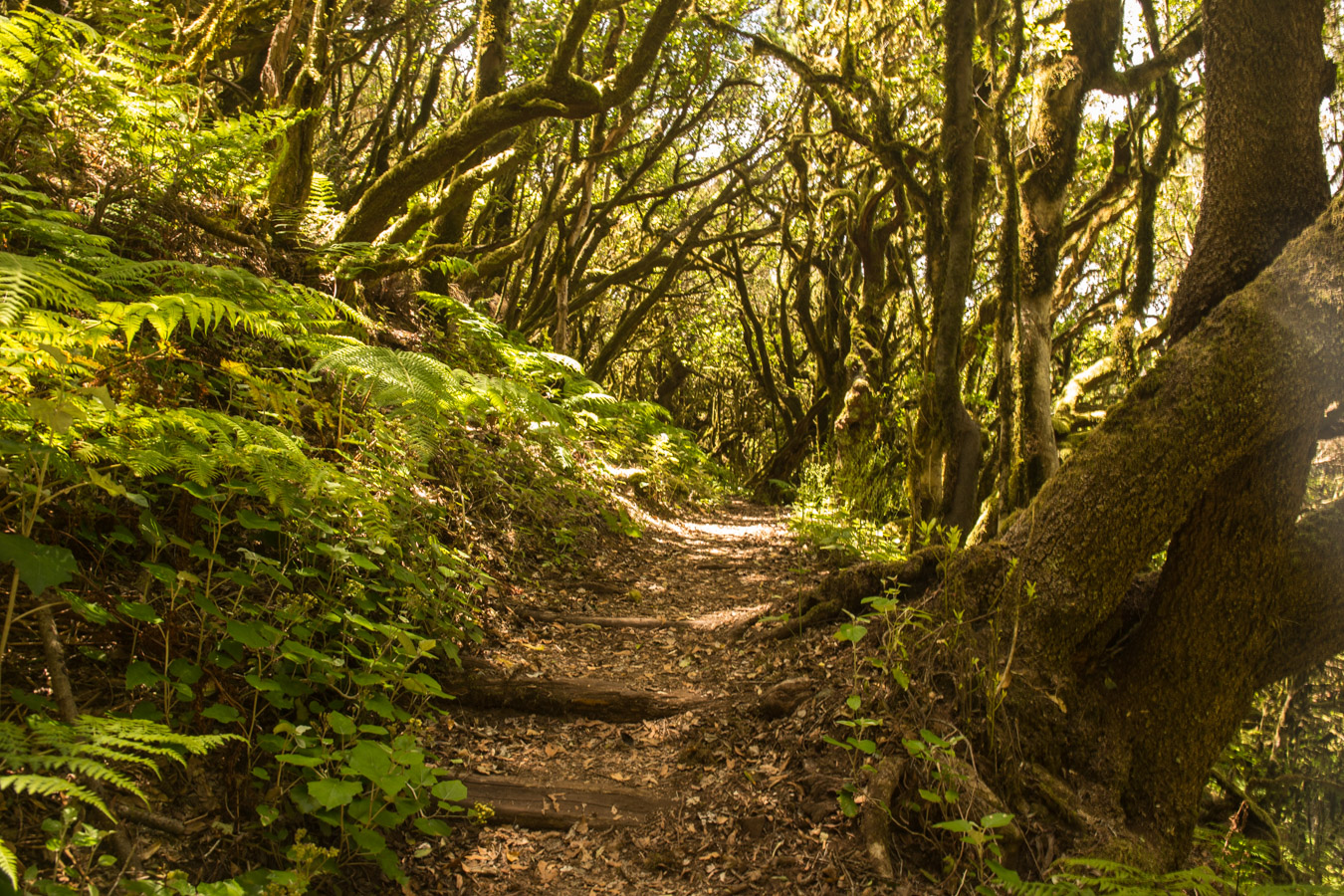 The oldest or most mature areas of the forest are dark and humid ; this environmental characteristic favors the proliferation of moss and ferns which gives the feel of being in a Jurassic tropical rainforest. It has been preserved thanks to the limited human activity during decades.

The evergreen forest is well appreciated because of its large number of canarian laurisilva. These species similar to the laurel have been able to evolve due to high humidity and relatively stable mild temperatures.

The National Park extends for approximately 4,000 hectares, nearly 11% of the total surface of La Gomera. This living fossil was declared National Park in 1984 and was included as a Human Heritage Site by UNESCO in 1986, which is the most important recognition for a natural area. Besides, Garajonay belongs to the Biosphere Reserve since 2012.

There are around 2,000 flora species. Most of them are Macronesian endemisms or, exclusive species of the island. The environmental conditions have created the large growth of some species that are mere bushes in other places. It is particularly highlighted the valley laurisilva, where we can find majestic samples of Loro, viñátigo or tilos. Other kinds of vegetations are appearing on mountainsides and mountain tops, such as palo blanco, mocanes or aceviños. Around laurisilva forest can be found another vegetal composition formed by faya and brezo, very common in the Canaries.

There is also a rich and diverse fauna as a result of the great variety of ecosystems. We can underline more than 250 endemic invertebrate species, amphibian, reptiles and birds.

Finally, it must be said that this National Park is also known for its management, its scientific work and its wide equipment network, offering facilities like the information and interpretation center, spectacular viewpoints or a vast network of integrated walking trails which are perfect to enjoy the beauty of the whole forest.

One of the most important landscape landmarks from La Gomera is located in the village of Chipude, La Fortaleza, a volcanic dome that has resulted from the erosion that left the hardest materials from an old volcano exposed. It stands as a plateau, with different and abrupt edges, especially towards El Barranco de Erque, where […]