The inhabitants from La Gomera preserve a really unique prehispanic custom, “el silbo gomero” (Gomera whistle language). It is a curious way of communication at a distance, an articulated whistled language that permits to exchange an unlimited range of messages when reproducing the sonic characteristics of a spoken language by means of whistles.

It is considered that this technique could have been much more extended along the islands in previous times but that it was only preserved in La Gomera to establish more complex conversations. This could be due to the isolation and the special geographic shape of the island because its hilly grounds and large ravines made communication difficult among the population centers.

The whistle is produced by introducing one or more fingers in your mouth, though it can also be done without fingers, in such a way that when blowing the air with a certain intensity and rhythm, playing with the fingers and the tongue, a diversity of sounds are uttered imitating the natural language. It is a very slow process to learn it, it would be like learning to speak and it requires much practice, above all to get enough skill as to permit issuing and decoding messages.

On favorable conditions, this can reach several kilometers, for example, from a valley up to the highest areas in the island. Besides, when the decoder of the information was too far, the information would be delivered from one “silbador” (a person that whistles) to another one.
The “silbo” is a language that is made public easily or even more than the spoken language due to its very nature. When someone communicates something with the “silbo”, for example, a piece of news, this is not only listened to by the addresser but many other people can listen to it too, so they are also involved in communication.

It has a magnificent value as an example of the human creative genius and a distinct culture.
Apart from being an adapted and developed system to make surviving easy in a certain context, their users have made it more technically and aesthetically complex. That is why it has deserved the protection of UNESCO as it was considered Intangible Cultural Heritage of Humanity in September 2009.

The “silbo” is a cultural heritage and the preservation of this phenomenon through an educative- social process is an example of a culture that is still alive through the years. As it is a language that reproduces another language, it has lived together with the Spanish language without excluding or competing with it.

The “silbo gomero” has been transmitted from generations to generations as part of the immaterial heritage of the community. This transmission, which for centuries was made thanks to the direct interaction between the master and the disciple, normally within the family, is now made by means of a formal education in the schools from La Gomera. This is due to the measures taken by the Government of the Canary Islands to preserve it.

The social changes that have taken place during the last half of the twentieth century nearly finished with the use of the “silbo gomero”. Only some tens of old people were able to practice it. The initiatives of different social partners from La Gomera and the Canary Islands made possible the drafting of a concrete legislation to preserve and reintroduce the “silbo gomero”. These laws, which are unique in the world regarding the protection of the oral and immaterial heritage, include the teaching of the whistled language from La Gomera in the curriculums of Primary and Secondary Education for all the schools from the island. This innovative measure has achieved that the survival of the “silbo” remains among the new generations. 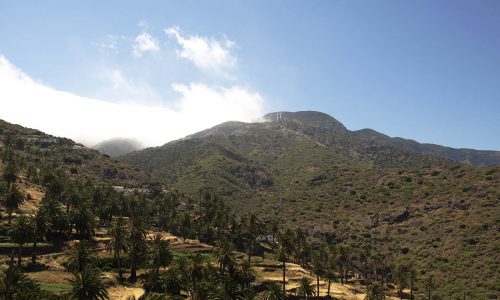 Cubaba is located on the northeast of La Gomera, very close to the Village of Alojera, in a very plain slope that gets from the mountains to the sea. This settlement represents one of the most picturesque and beautiful landscapes in the entire Gomera. It is a very arid and eroded area where we find […]