In this section you can know about the wide range of religious architecture that the Municipality has in Vallehermoso. The local chapels and churches are part of a net of about 15 religious buildings which are different in size and origin.

The evangelization of La Gomera would start from the fifteenth century onwards with the arrival of the Portuguese people to the Northwestern coast of the Municipality. Since then, churches and chapels have been built in nearly all the villages of Vallehermoso.

This particular distribution suggests going on a route around the chapels or churches in the area. Each temple and neighborhood related holds a year celebration to worship the religious images that they shelter, especially in summer. Nearly all the villages that are part of Vallehermoso call up religious and popular events where you could enjoy the local leisure and know about traditions like “el baile del tambor” (the dance of the drum)

Located in the hamlet of Tazo, you can find one of the oldest religious buildings of La Gomera. Following the traditional way of building a single nave chapel. The works started in the sixteenth century, undergoing further reforms. We must highlight the image of the patron saint, dating from the mid-sixteenth century.

Located in the area of the Ingenio (so called because it means sugar refinery), where centuries ago there was a sugar plantation, the chapel dates from the seventeenth century. An interesting sculpture of the Virgin of Carmen is preserved inside since the eighteenth century.

The first temple dating from the sixteenth century, although a second nave was added a century later. Notable for its architectural solidity and its roofs, there is an interesting Indian baroque custody and an image of its patron saint, a beautiful piece of the nineteenth century anonymous imagery. 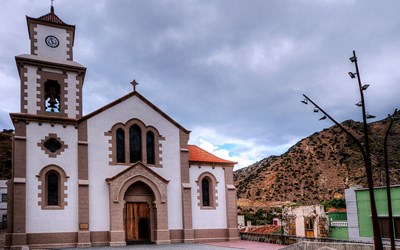 Built in the seventeenth century, like the rest of the parishes in the north of the island, it felt into ruins during the nineteenth century and was rebuilt as a new church in the Gothic style. We must highlight its slender proportions and two pieces of remarkable artistic interest: the Lord of Humility and Patience (XVII) and the Christ of Triana (XVIII).

This is the only Rural Park in la Gomera. The 30% of the surface is part of Vallehermoso, running between the basin of the “Barranco de Argaga” and the mouth of the “Barranco de Iguala”. It occupies the mountains that are located in the middle of both. It is featured by its mountainous and steep […]