These are two little villages located inside the Protected Landscape of Orone, at the top of the Barranco de Erque, on the southside of the Municipality of Vallehermoso. We can get there by a little paved road between Igualero and Chipude.

These are two very scattered settlements along one of the most amazing and deepest ravines of the entire island. This area, which was already inhabited in the eighteenth century, was isolated from the rest of the island due to the great variations in altitude, that’s why its inhabitants had to be self-sufficient. The great sources of water in the area as well as the rich agriculture by means of terracing, the livestock and the exchange of materials with the coast and summit areas made it possible.

The groups of houses have the traditional rural aspect, with old houses made of stone and other new ones made of cement which are distributed in a stepped way on the slopes. Next to the houses there are also well preserved thick walls, ways, threshing floors and stone ovens. All of them are surrounded by big palm trees. 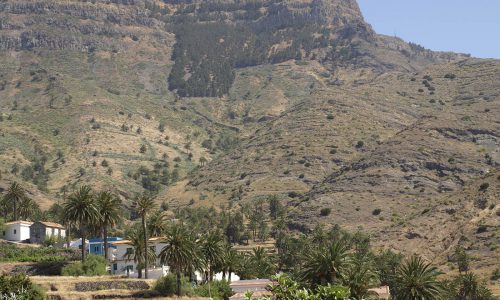 Alojera is located on the northeast of the municipality and is one of the most important group of populations in the municipality because of its history and inhabitants. It is located in a very plain slope that goes down towards the Natural Monument of the Lomo del Carretón until the sea. We refer to a […]